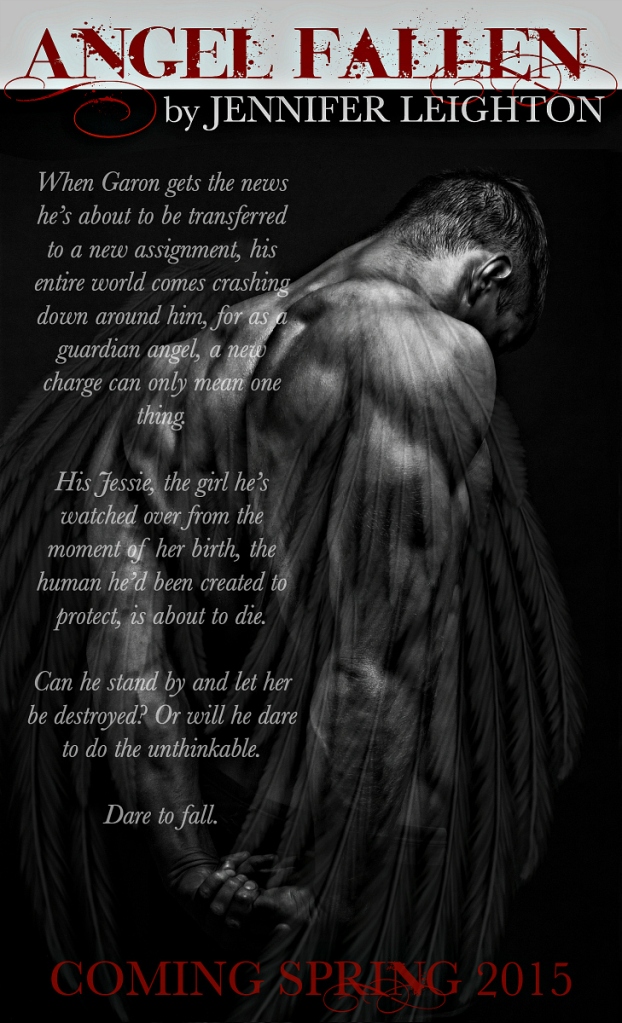 When Garon gets the news he’s about to be transferred to a new assignment, his entire world comes crashing down around him, for as a guardian angel, a new charge can only mean one thing.

His Jessie, the girl he’s watched over from the moment of her birth, the human he’d been created to protect, is about to die.

Can he stand by and let her be destroyed? Or will he dare to do the unthinkable. 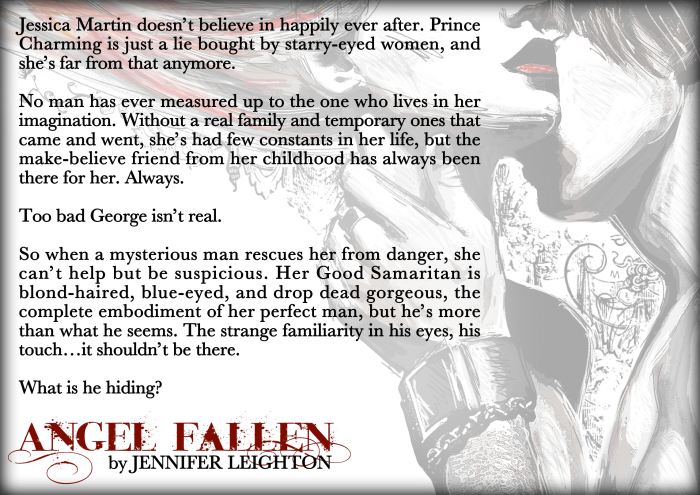 Jessica Martin doesn’t believe in happily ever after. Prince Charming is just a lie bought by starry-eyed women, and she’s far from that anymore.

No man has ever measured up to the one who lives in her imagination. Without a real family and temporary ones that came and went, she’s had few constants in her life, but the make-believe friend from her childhood has always been there for her. Always.

So when a mysterious man rescues her from danger, she can’t help but be suspicious. Her Good Samaritan is blond-haired, blue-eyed, and drop dead gorgeous, the complete embodiment of her perfect man, but he’s more than what he seems. The strange familiarity in his eyes, his touch…it shouldn’t be there.

What is he hiding?

And now for the teaser excerpt, taken from the beginning of chapter one:

Garon let his eyes move over Jessica as she undressed, brushed her teeth and removed that strange face paint human females were so fond of. If only he could tell her she didn’t need such adornment. She was never more beautiful than when she’d first woken up, her hair all tousled and her skin bare and glowing. She was just his Jessie, then. The girl he’d watched over from the moment she’d been born into the world.

The human he’d been created to protect until the inevitable time of her death, for he was her guardian angel.

She was older now, twenty-four in years, and he’d been there for every single second of them. With her summer-tanned skin, curvaceous body and golden brown eyes, his Jessie was no longer a little girl, but a woman, and a beautiful one at that.

He knew every inch of her…knew how her dark hair curled up when wet and how she spent far too long each morning forcing it straight. The why had always escaped him, for it was perfect in its natural state, as was she.

Every scar on her body and the story behind it…he knew those, too. Take the one on her chin; it had come from an accident in the bathtub. She’d decided it would be fun to use the end of the tub as a water slide and had to be taken to the emergency room for stitches. She’d been but six years old then, and terrified of hospitals and doctors, a fear she never outgrew. He’d soothed her as best he could, projected calmness into her spirit and held her hand until it was over. His reward had been her crooked, gap-toothed smile.

Someone had asked whom she was smiling at, and she’d replied with, “George.” It was then he’d realized Jessie could see him. She could feel his touch also. He knew because when he’d squeezed her hand, she’d squeezed his right back. It hadn’t made any sense, as humans weren’t supposed to have the ability to communicate with angels, but Jessie had always been special. From that moment on, their relationship was different.

He became not only the soother of her hurts, but also the one she ran to when she had good news to share. Over the years she’d entrusted him with a great number of secrets, shared with him her heartaches and joys, and no matter what subject she wished to talk about, he’d always listened eagerly, as he was glad for any chance to interact with his Jessie.

Happy to be considered her friend.

Her complaints were the same as other girls her age…about school, and when she reached her teenage years, about this boy or that. Gradually their talks had grown less and less frequent, for as the older she got, the less she seemed to need George. Need him. But the opposite was true for Garon.

Their last such conversation had been on the night of her high school prom. She’d confided she was considering letting her boyfriend Brian go “all the way.” He hadn’t understood what that meant until the pimply-faced teen hiked up her skirts and pushed his male organ inside her body. Garon had decided right then and there he was very much against her going all the way. He hadn’t liked it.

The whole thing was over in just a few short minutes, but they were the longest minutes of his never-ending life. A strange feeling had come over him as he’d observed Jessie’s first foray into human lovemaking…an emotion he’d heard of but hadn’t yet experienced.

He was jealous of Brian—jealous of the connection this boy shared with his Jessie. And for the first time in his existence, he wanted to be something other than what he was.

Wanted to be human.

That night changed them both, for the last little bit of her girlhood vanished, in her eyes as well as his. Sweet Jessie became grown up Jessica, and Garon became not a guardian protecting his charge, but a man caring for his woman.

Such feelings were unheard of in the spirit realm, for angels did not have what could be called relationships, sexual or otherwise. They didn’t procreate either, not with each other and certainly not with humans. It just wasn’t part of their function.

Their parts would all fit together, though. An angel’s body and the human form were nearly identical in physical make-up, with a few important exceptions. As possessors of supernatural abilities, angels were far more powerful, and then there was the matter of wings.

Another significant distinction: angels were fashioned as adults from the beginning of their creation, their purpose already ingrained in their nature. As such, there were no babies of his species, and no cherubs either, as cute as they were in human depictions.

Jessie had been an adorable baby, and so would her offspring if and when she had them. Garon had always known she would eventually settle down and find “the one,” as she called it, the man she would spend the rest of her life with, and he dreaded that day. No man would ever be good enough for her. No man would love her enough.

He was not a man, though, but a celestial being, and these desires he felt for Jessie were unnatural. Anything unnatural was strictly prohibited in the spirit world. He was to look but not touch. Care but not love. Exist but not live.

Guardians, as all angels, were to do their jobs no questions asked, and stay within the boundaries they’d been given. Keep a respectful distance and interfere in a charge’s life only when absolutely necessary; those were the rules.

But Garon’s devotion to Jessie far exceeded what was deemed normal or acceptable. As an angel hopelessly in love with a mortal, he’d been bending the rules for quite a while now.

Though her feelings weren’t the same, it didn’t matter. For six long years he’d spent his days watching her in silence, her never acknowledging his existence, yet he still faithfully carried out his duties as her protector. He yearned for the friendship they once shared, but counted himself lucky she’d ever glanced his way at all.

Since that fateful night of her prom, she’d had many more sexual encounters over the years, and each time he’d watched with a mixture of envy and fascination. Even though it felt like his heart was being ripped out of his chest, he’d been unable to tear his eyes away from the sight.

He knew Jessie’s body better than he knew his own…every dip and curve and hollow. Worshipping her from afar, he’d learned what gave her pleasure by watching other men kiss her mouth, caress her breasts, and thrust their cocks, as he discovered they were called, inside her.

Sometimes she would stare up at the ceiling toward the end, her brown eyes widening and her mouth forming a perfect “o.” Garon had long ago chosen that vantage point from which to observe, his curiosity driving him nearer. Suspended in the air a few feet above her, the man she was with would then cease to exist, and it would be him kissing her, him moving in and out of her body.

Love her he did, which was why when he’d gotten the news today that in the morning he’d be transferred to another charge, his entire world had come crashing down around him.

A new charge could only mean one thing: his Jessie was about to die. All humans die eventually, as they are not immortal like angels, but he hadn’t expected it now, not so soon.

How would it happen? Would it be a quick and easy death or would she suffer? He knew he was supposed to just accept it, as that was the way things were for his kind, but he didn’t know if he could.

The knowledge that Jessie—his bold, brave Jessie—would no longer be alive in a few short hours hurt more than he ever could have dreamed. She should marry and bear children, have a beautiful life and die in her husband’s arms when she was old and gray. She deserved that kind of happiness, and he wanted it for her, even if it would never be with him.

She climbed into bed, oblivious of the fate that awaited her, that her short existence on earth was about to come to an end, and though it broke every rule, Garon followed after.

He’d never dared to get so close before, not since becoming invisible in her eyes, but as she turned on her left side as she often did when she slept, he lay down beside her with an arm tight about her waist. She was nude, as she always slept that way, and being so close to her while in such a state did strange things to his body. Things that both excited and confused him.

Burying his nose in her hair, he inhaled the familiar scent that belonged to his Jessie. She smelled of sunshine and summer days. Clean and sweet.

Tender memories of days gone by flooded his brain. Holding hands with her. Weaving buttercups and daisies in her hair. Twirling her around until she grew dizzy and collapsed to the ground in a fit of laughter. Lying with her in the warm grass and gazing up at the splendor of the moonlit sky, counting the stars.

With a soft little sigh, Jessie relaxed against him, the tension in her frame slowly melting away. Garon held completely still, for though it had been so long since she’d taken any notice of him, he still didn’t want to risk ruining this moment. Her body molded to his so perfectly. If only this night would never end. He could lie here like this forever.

If only she knew he was there. If only she could see him, touch him, feel him in the way she once had.

If only she knew how very much he loved her.

***any portion of the above excerpt is subject to change before publication as I’m still in the process of editing.

For more information about me, see my page here: http://freakcirclepress.com/authors/jennifer-leighton/

4 thoughts on “Teaser and Blurb: Angel Fallen by Jennifer Leighton” 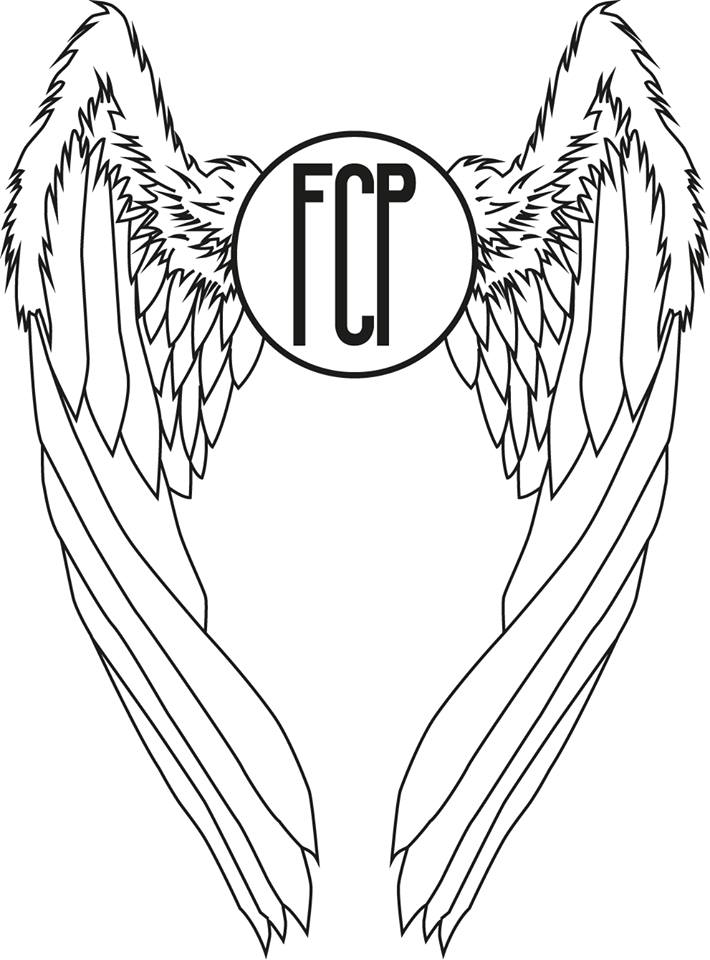