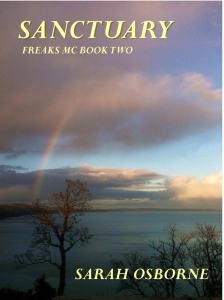 Unlike his brothers, who had regular jobs, wives, kids…. a place to call their own, all Samson had was his bike, the road and the club. It was enough, but sometimes when he needed to escape all the crazy, he came here.
He knew she’d never be his old lady. That wasn’t a life for her. She loved to ride with him and was under no illusion about the club and his role in it, but she was too much of a free spirit to tie herself down that way. And even if she was willing to give up her solitude, what would the club make of this weird, vegetarian, hippie chick who spent her days growing vegetables or painting, and in the evening would rather curl up with a book than party?